Aromatic hydrocarbons, also called arenes, are a unique class of carbon molecules in which carbon atoms are connected by alternating double and single bonds. The traditional view of such a bond character is diagramed as follows:

The above structure, however, does not aptly describe the character of the bonds between the carbon molecules because the illustrated double bounds are more flexible than standard double bonds while the single bonds are less flexible than single carbon-carbon bonds in other molecules. It is also true that every bond in an aromatic hydrocarbon is the same length, rather than the “single” bonds being longer and the “double” bonds being shorter as would be expected. These properties have led to the term aromaticity, which describes a bond that is intermediate between single and double or a 1.5 bond. Thus, the structure of an aromatic bond is more like the following diagram.

The above diagrams simply show the bond structure, the other important component of an aromatic hydrocarbon is that it is ALWAYS in a ring. This is because a ring is the only way for bonds to be shared equally between carbon atoms. Thus, the actual structure of an aromatic hydrocarbon is best demonstrated by benzene, the type molecule for the class.

The structure of benzene can be drawn in two ways. In the first, the double bond character is explicitly drawn. In the shorthand version, a circle is simply drawn inside the ring to demonstrate the structure. Each carbon atom in benzene has a single hydrogen attached to it. In the diagram, the hydrogen have been omitted for clarity. 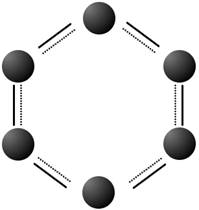 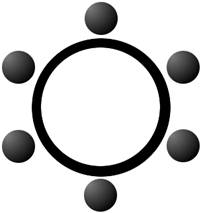 Like other hydrocarbons, benzene is a natural component of petroleum. It is a colorless, flammable, sweet-smelling liquid at room temperature and is a component of most gasoline mixes as it has a high octane number. Benzene is also highly carcinogenic and is well-known to cause bone marrow failure and bone cancer. Of course, its carcinogencity was not well known when it was being used as an additive in after shave and other cosmetics due to its “pleasant aroma.”

What makes benzene carcinogenic is its interaction with DNA. It breaks the bonds between subunits of DNA in the body, which in turn causes cells to either die or reproduce without normal controls (cancer). It is general consensus that no amount of benzene is safe, but this has not stopped its use in many industrial and laboratory applications where is properties have yet to be supplanted by another substance. Toluene is used where possible as a less carcinogenic and less toxic alternative to benzene.

Currently, the largest exposures to benzene occur through smoking as it is a byproduct of burning the tar found in cigarettes. The second largest exposure is in gasoline service stations, which, when combined with industrial emissions and the emissions from car exhaust, accounts for 20% of all atmospheric benzene.

The largest use of benzene (50%) is in the product of styrene and polystyren plastics. It is also converted to a molecule known as cyclohexane, which is important in the production of Nylon. About 15% of benzene is used to produce cyclohexane. Smaller amounts are used in everything from pesticides to rubber to pharmaceuticals.

In general, benzene is the only stable aromatic hydrocarbon. Rings with fewer or more carbon atoms are not stable and are of less importance than benzene. In some cases, the substitution of a carbon atom with another element, such as nitrogen, can produce an aromatic structure as well. These are, of course, no longer hydrocarbons, but they do have important applications and can be constructed from aromatic hydrocarbons.

Pyridine is the most commonly known aromatic that contains an atom other than carbon. In this case, nitrogen replaced a single carbon atom to produce an aromatic molecule with the formula C5H5N. Pyridine is a common organic molecule that is found in vitamins, various pharmaceuticals, and acts as a precursor to a number of other biologic compounds. (Blue represents nitrogen in this diagram). 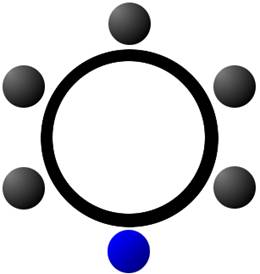 This term is applied to any hydrocarbon that has two or more aromtaic rings. These molecules are highly lipophilic, which means they have a proclivity for oils and fats, and are also highly carcinogenic. This combination means that these carcinogens enter the body and they do not leave again because they become absorbed into fat molecules. The burning of coal from coal-fired power plants is the main source of PAHs in the atmopshere. PAHs are also found in meats cooked at high temperatures.