Chemistry can be confusing because the generic term energy is thrown around quite a bit. You have probably read, even in these articles, that bond formation releases energy only to later read that energy must be USED to form a bond. What is going on here?

The formation of a chemical bond is nothing more than an attraction between two different atoms. So why do atoms become attracted to one another? Well, the answer has to do with protons and electrons.

The nucleus of an atom is made up of protons, which have a positive charge, and neutrons (except for hydrogen), which have no charge at all. Circling around the nucleus is a cloud of electrons, which have a negative charge. Now, The type of atom you have is determined by the number of protons. For instance, one proton gives you hydrogen, two helium, six is carbon, and eight is oxygen. In most cases, the protons are balanced by electrons so that the atom has an overall neutral charge. So oxygen also has eight electrons. (We won’t consider isotopes and ions here).

Okay, so far so good. If you look at the periodic table, you will see an interesting arrangement of atoms. The reason that the table has such a unique shape is that atoms in the same column behave similarly to each other. As it turns out, this similar behavior has to do with electron configurations. 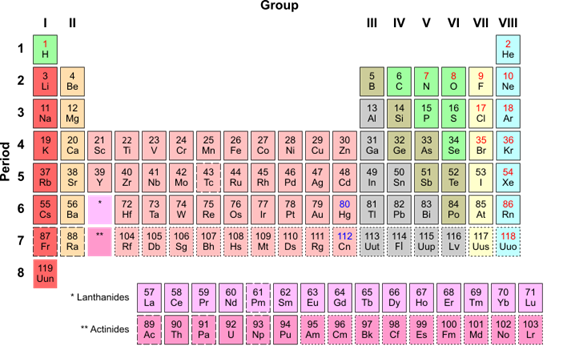 Electrons behave in certain ways, but to keep things straightforward, we will consider only one property.Eelectrons form orbits around a nucleus. What this means is that electrons aren’t just anywhere in the cloud surrounding a nucleus. Instead, they fall into specific patterns called orbits. As it turns out, each of these orbits (called orbitals) can hold a defined number of electrons. For instance, the first orbit can hold two, the second can hold eight, the third can hold eight, etc. The shape and configuration of orbitals gets very complicated, but for now we just need to know that filling an orbital makes an atom stable. So, the last column on the right of the table represents atoms that are the most stable.

Every atom wants to be like the atoms in that last column, but there is a problem. If an atom gives up an electron, then it becomes unstable because the charge from its nucleus is not balanced by the charge from the electrons. These high energy atoms (called ions) don’t hang around for long. The question is, what do they do?

The answer is they form pairs with other atoms and they share electrons via a chemical bond. In so doing, all atoms involved in the bond are able to get enough electrons to fill their orbitals, but because they are “sharing,” they don’t run into the charge balance problem that ions have. Let’s look at an example:

A hydrogen atom has one electron, which means it is one away from being stable like helium, which has two electrons. Oxygen, which has eight electrons, needs 10 to stable like neon. If oxygen “bonds” to two hydrogen atoms, then it will have 10 electrons because it shares one with each hydrogen atom. By the same measure, each hydrogen atom also gets to share one electron from oxygen, thus reaching the two it needs to be stable. This formation, which is water, is more stable than the form in which oxygen and hydrogen are separate. The more stable something is, the lower its energy will be. So, energy is released when oxygen and hydrogen combine to form water. This is true of all bonds.

So we know that forming a bond releases energy. Why then does burning a hydrocarbon produce energy if we are breaking bonds in the process and have to invest energy to do so? The answer to this question is no more complex than adding up the total number of bonds broken versus the total number of bonds formed and taking into account the stability of those bonds (more stable bonds have lower energy than less stable bonds).

In a reaction of methane, we have the following (carbon = black; oxygen = blue, hydrogen = red):

Note that one methane molecule (CH4) combines with one oxygen molecule (O2) to form carbon dioxide (CO2) and 2 water (H2O) molecules. The equation is balanced so that the number of atoms on the left is the same as those on the right. So, there are four hydrogen atoms on the left and four on the right (2 per water multiplied by two water molecules). The same goes for oxygen (four on each side) and carbon (1 on each side).

What is different in the equation above are the bonds. On the left there are eight total bonds (four in methane and two in each of the oxygen molecules). One the right, there are a total of eight as well (4 in carbon dioxide and 2 each in oxygen). So, we didn’t form any extra bonds, but we did form more stable bonds. CO2 is one of the most stable molecules we know of and water, well, we would have so much of it if the bonds were not stable.

To break the bonds in methane and oxygen, we had to put some energy in. However, because we get out molecules that are more stable (methane’s instability is evidenced by how easily it burns), we have a net GAIN of energy. This is reaction energy is different from the bond energy, even though they are related.

So, when we talk about energy in reactions and bond, keep in mind that the trend is always toward lower energy. If a bond needs to be broken, then some energy must be added. However, if the end product has more or more stable bonds than the reactant, then there will be a net gain in energy.